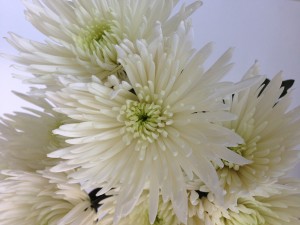 If you are on the lookout for an innate flower filled with goodness and striking splendor, then you are sure to like spider mums. Recently we ourselves ordered a few to shoot pictures, when they were placed in the house they were more than pleasing and they brightened the whole place up. We also presented few to our next door neighbors and they were delighted to see these exquisite flowers. They have a striking charisma which enchants anyone who sets eye on them. If you are thinking of buying these beautiful flowers then do learn these facts about them in advance.

Spider mums come from chrysanthemum family; in the United States they are called football mums because of they are used at football events and homecomings. In Japan and China they are highly admired. They are remarkable for the reason that they hold on to their bloom long after the flower head has been cut. Spider Mums also posses antibacterial properties. That’s not all; they can be used to manufacture natural insecticides which is not damaging to the environment.

Lets us share with you brief history of Spider mums; did you know that these gorgeous blooms are native to China and have grown to be popular in the US only in the last century?  In 18th century Karl Linnaeus (Swedish botanist) came up with the name chrysanthemum which comes from two Greek words, “Chrysos” meaning gold, and “Anthos” meaning flower, that’s how they became “Golden Flowers”. In the year 1989, it was discovered by NASA that spider mums have the ability to eliminate toxins from air by absorbing around 61% of formaldehyde from the surroundings.  They are identified as a likely source of an insecticide called pyrethrum which is used as a flea repellent. They are also used in tea in Asia for medicinal use.

Spider mums have a distinctive look on their heads. They reach up to 6 inches, and are available in light green, white, bright yellow and pale purple colors. Their florets (petals) are thin rays with coiled ends. Mum petals are named florets since technically; every floret is an in itself a flower leaping from the central disk.

Lastly, what is noteworthy in relation to spider mums? Well, they in fact have different significance in different countries. In US they express a bohemian touch to bridal bouquets. In Japan spider mums imply “celebration of happiness.” If we talk about their significance in China, then they convey “aristocracy.” And in Europe they are placed on graves.

Spider mums are full of nature’s righteousness and Whole Blossoms has a number of varieties for you to opt from. You won’t be dissatisfied with their appearance; they create a wonderful floral arrangement for your home or in your special occasions. 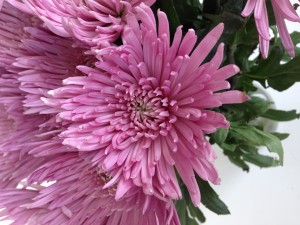 Here are a few varieties available with us: