Kangaroo paw is the common name for diverse species, in two genus of this family Haemodoraceae, that are widespread in the south west of Western Australia. These perpetual plants are renowned for their distinctive bird attracting flowers. They have tubular flowers coated with thick hairs and open at the peak with 6 claw resembling structures: because of this paw pattern the common name “kangaroo paw” is derived.

The form and color of kangaroo paws make them a unique and rewarding Australian local plant for home gardens. Kangaroo paws are also great cut flowers. They are exported to various parts of the globe and are commercially grown in the USA, Japan and Israel. 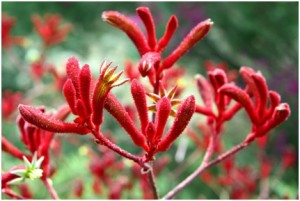 Kangaroo Paws varieties available with us: